Morocco is a country of many faces. Officially the ‘Kingdom of Morocco’, it is an Islamic constitutional monarchy with 32 million inhabitants, ruled by King Mohammed VI since 1999. "Morocco is a tree whose roots lie in Africa but whose leaves breathe in European air ", was the metaphor used by late King Hassan II to describe a country that is both profoundly traditional and strongly drawn to the modern world. It is this double-sided, seemingly contradictory disposition that gives Morocco its cultural richness.

Its climate and varied topography, offering beaches on the Mediterranean Sea and Atlantic Ocean, land inwards mountains and forests, and deserts in the South, make Morocco a very interesting country with an unlimited variety of sightseeing possibilities. The country is a mixture of Andalusian, Berber, Arab, Jewish and Saharian roots, showing its heritage in architecture, arts&crafts, clothing, music, yearly festivals and daily traditions.

The cultural, spiritual and geographical richness combined with the safety and modernity, have made Morocco over the last 2 decades North Africa’s first touristic destination. 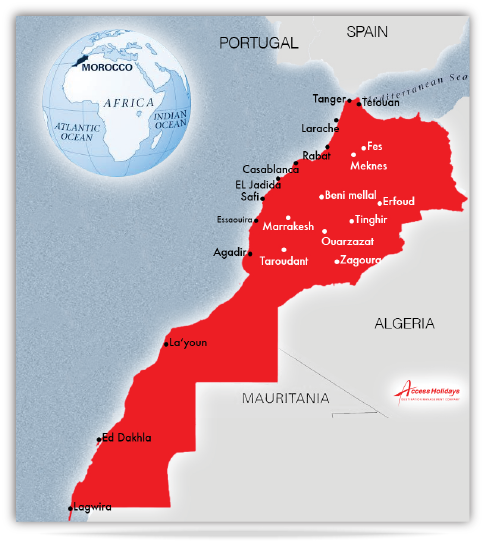